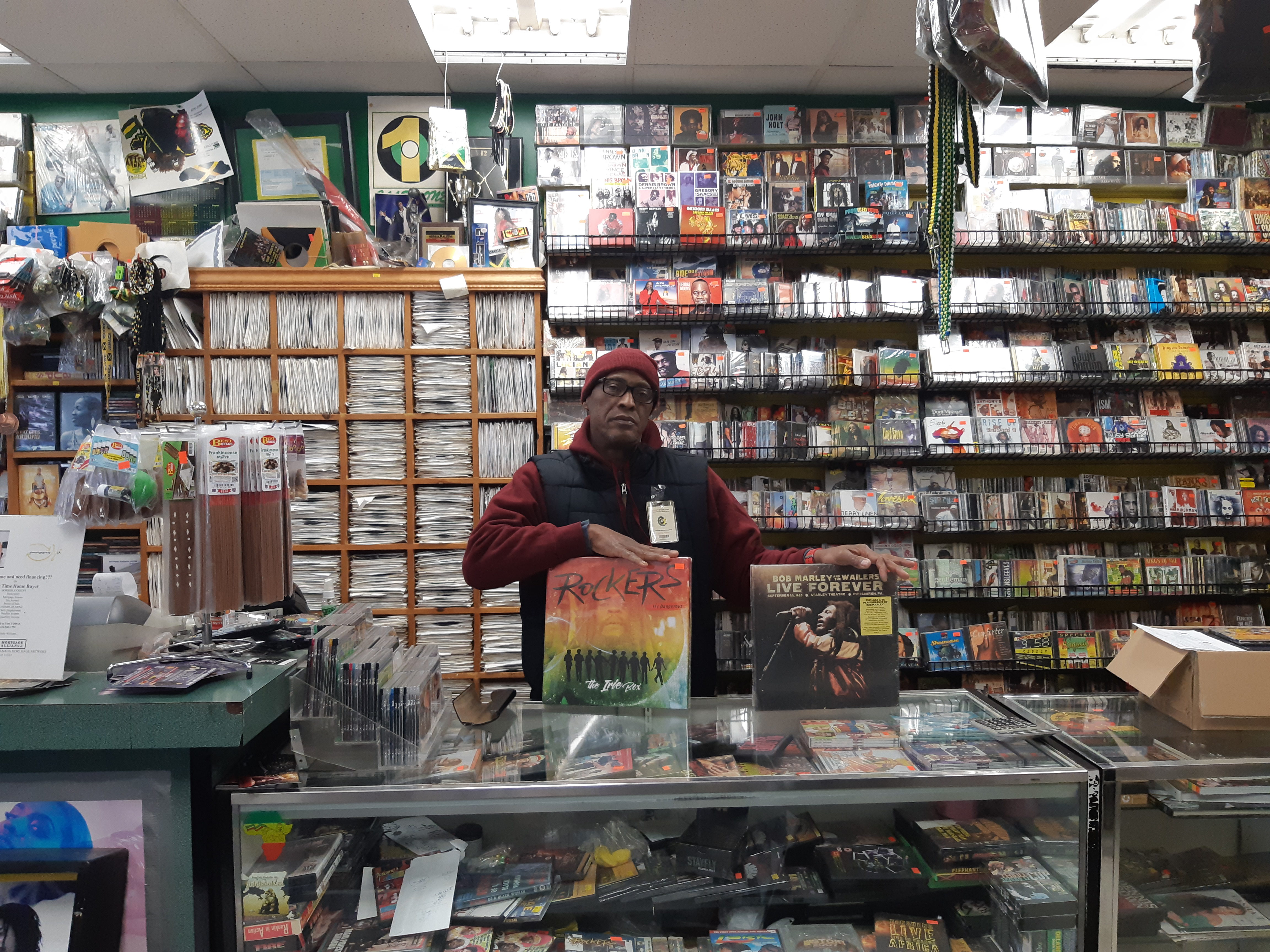 Devin Blake is the owner of ‘Class One Record’, a record store in Scarborough that has been open for 20 years.

The small record store is about the size of a typical Toronto apartment bedroom. The space is always filled with music; usually, a reggae vinyl that’s been chosen off the yellow and green wall across from the counter, where the owner, Devin Blake overlooks the store. The former selector, sits next to the purple record player, watching a Caribbean news station on his phone. In Jamaica, the ‘selecta’ would be the person who Canadians refer to as the DJ. Customers come in and out of the store, Blake chats with them in patois before they make a purchase and leave. Most of them buy CDs. There is always a friendly greeting:

“What can I get for you boss man?”

“Everybody has a dream, that’s why I came to Canada,” said Blake. “This is my dream, this is my passion. Music was always in my bones from a likkle boy.” Blake, age 62, has been a lover of reggae music since he was a child living in Montego Bay, Jamaica. “Eighties is my favourite set of music, because in those days I was a selector,” said Blake. He officially started playing music at dances in 1982. His first time ever turning tables for a crowd was when he snuck out of the house to play music for a dance at 12 years old.

Blake tells a story about how he risked getting in trouble by his mother to go play music.

Blake began studying in the electrical trade at 13. He worked as an electrician in Jamaica until one year he was visiting a friend in Montreal while on vacation who encouraged him to stay. Once he moved to Canada in 1987, he worked as a painter until he caught pneumonia and had to undergo lung surgery. “The doctor stopped me from painting houses.  I had nothing to do, so I decided to make a plan,” said Blake.

Twenty years later, he is still running his business. The outside windows of the shop are plastered with event flyers and Blake sometimes works with promoters to sell tickets. If the weather is nice, ludi boards are displayed out front of the shop. Ludi is a popular board game that is played in Jamaica. Inside the store, there are more pictures on the walls and some are of artists. Blake says that sometimes local Canadian, American, and Caribbean artists will pass by the store to say thank you for promoting their music. Artists that have been to the store include Empress Minott, Luciano, and Wayne Wonder.

Blake smiles as he polishes one of his two recognition awards that he received from Reggae Xclusive Entertainment News in 2018 and 2017. The awards read “Top Business Supporter.” His store is also advertised in their spring 2019 issue.

Class One Record carries hip hop, R&B, dancehall, and soca CDs, but the majority of the vinyl records are reggae. Some of Blake’s favourite artists include John Holt, Dennis Brown, Bob Marley, and Peter Tosh. But his favourite DJ is U-Roy. “That’s the don for DJ music.”

This location was supposed to be temporary. The plan was to make enough money so that Blake could get a space that’s much bigger than what he has now. “Have my own store, studio underneath the bottom, the store on top. That’s my dream, but internet shattered it. Download, shattered it.”

Within the first six years of being open, Class One Record was a thriving business, but that changed drastically when vinyl and CD sales started to crash worldwide. Phonographic records, also called vinyl’s were the most popular in the 1980s, but became overshadowed by compact discs in the 1990s. Now, according to a 2018 Rolling Stone article, CD sales have fallen by 80 per cent over the last decade. Music listeners are choosing the convenience of streaming digital formats over owning physical formats.

If record sales didn’t fall, Blake said he would have his two-storey music store and his recording studio by now.

Blake reminisces about the first couple of years he opened his store. “On a Saturday… in here would have been crammed with people. Now, God bless if two customers or three customers come in,” said Blake. “You couldn’t compare the beginning to this time. This time, the internet mashed it up. In those days, it was good. Everybody wanted records. Don’t nobody want no record anymore. Majority of the people who buy records now are the collectors.”

Blake explains that his passion is what drives him to work every day. “Sometimes, I don’t even want to come here, but as I go home and sleep, I wake up the next day looking forward to come back to work, because this is me. My store is mi, and mi is my store.”

Blake said that if he was only in it for the money, he would have closed down his shop a long time ago. He genuinely loves his job and works about 70 hours a week. “Music is a thing that I love, reggae music, that’s why I have this [store] today, I love it.” Blake says that he feels good at the end of a long day because he knows the bills still need to get paid. “You work harder, when you own your own business than when you work for somebody. You have to do everything for yourself.”

Blake says that he isn’t worried about going out of business and keeps his hope strong because he has seen that vinyl sales are slowly rising again. The resurgence of vinyl has been evident. Canadian vinyl sales have grown by 66.6 per cent in 2018 alone.

Natasha Blake, account representative for Flow 93.5, said that she’s impressed by Blake’s dedication. Blake is one of her previous clients from when she worked as an account representative at Yellow Pages from 2002-2013. She confirmed that Blake worked just as tirelessly back in the early 2000s as he does now. “It’s great because records are a dying thing, at the same time, he’s kept with it, and he’s kept going. It’s amazing.” Natasha Blake said that she is glad to see that the community is still supporting the store, and that she plans to stop by soon to say hello to Blake.

Blake will never give up on his dream and immense perseverance has brought him and his store through 20 years of business. He still hopes to cease renting and purchase his own record store and recording studio. “If it happens, you will see what I have. So, pray for me when you go home.”

Blake shares some words of advice for those wanting to start their own business.

Meet the owner of the best pizza place in Scarborough

Marshal “Yousef” Omar is the owner of Big Brothers Gourmet Pizza, located in Scarborough, Ontario. Omar prides himself on using only fresh ingredients in his food. Today, the team made 150 pizzas in three hours to deliver to local schools.