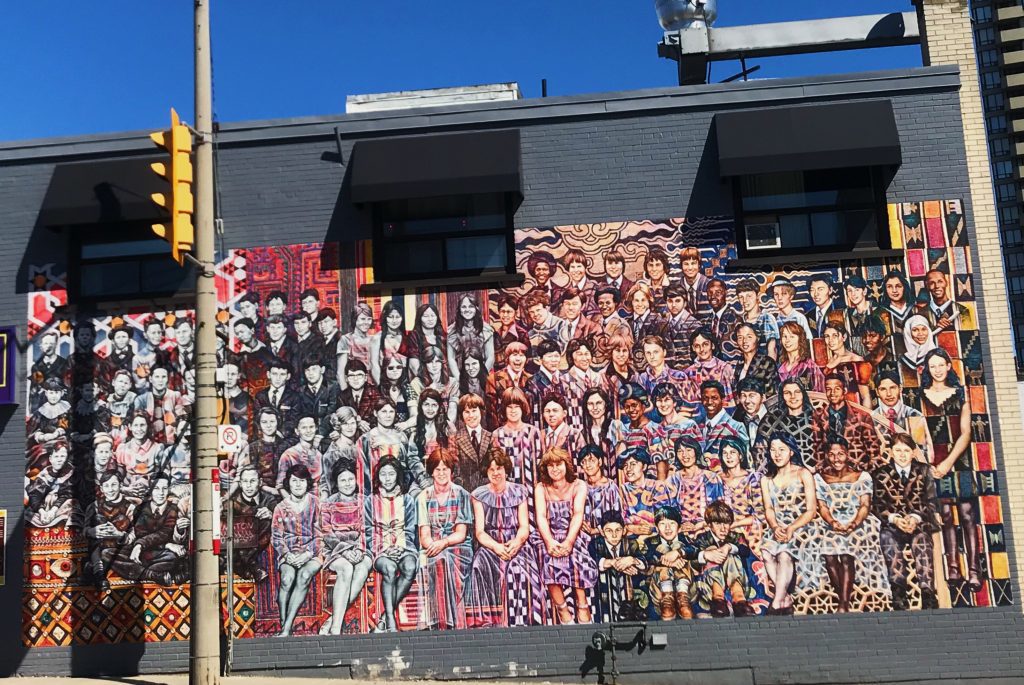 The Islington Artwalk murals blanket five blocks of Dundas Street W. between Islington and Kipling, depicting early 1900s history of the community. The ground to the height of building sides display murals of real events, people, and places of the past in a pioneer fashion. The founding families of Islington in the ‘Ordinary Folk Extraordinary Lives’ mural are prime examples of the neighbourhoods history. The mural is horizontal, and characters sit in front of their Islington burial ground tombstones accompanied by sunlight warm, yellowy trees of autumn in the backdrop. In the vivid deep violet and navy colours, the men and women, both old and young are dressed in bunchy dresses and suits, rounded-brim hats and stockings.  Although some faces are somber and others with a slight smile, they sit forever frozen mixed in harmonious, soft, and rich colours, creating an undeniably captivating realistic yet nostalgic tone.

Since the project began in 2004, some residents of Islington Village raise concern about these murals. Out of the current 28 murals largely plastered on the sides of local storefronts and businesses on Dundas, a whopping one mural contains characters of different cultures and colour. The remainder exclusively depict white folks. With an immigrant population of 37.8% from a 2016 census and a 27.7% visible minority population, the contrast of one mural of colour to 28 white raises questions for residents of why their lives and stories in the neighbourhood are not being told.

Islington resident Tate williams finds that Islington currently is a culturally diverse area, “it’s still my culture missing in something that seems so vital to the community.” she said.

According to Williams, “We all contribute to the history in this area, there should be more representation.”

The Islington art-walk is an ongoing art project by the village’s Business Improvement Program (BIA) with hopes to ‘prevent graffiti, preserve the neighbourhood’s history and create a sense of place’ through the murals painted along Dundas Street. According to the BIA’s website for Islington village of murals, the free community art is a chance for people to see “a unique neighbourhood with very interesting stories to tell”, while for people who live in Islington, “the art creates a real sense of community pride.”

Lola Macaowicz, the chair of The Village of Islington BIA Board of Directors, stated that after receiving the initial government funding in the 1990s they decided to go forth with something impactful that would last, rather than something like a festival that would be “over the next day.” The Mimico by the Lake BIA, of which the murals are a part of, currently receives funding from the business in Islington, has proposed a 2019 operating budget of $79,977 with a levy of $54,837. The BIA is trying to make the area prettier. Graffiti has covered the walls. They chose to paint over the walls with murals. “That’s when we decided we were going to highlight historical stories of the village and Etobicoke,” Macaowicz said. “We want the murals to look nice, but we also want them to have a story.”

Arts Etobicoke, an organization that offers accessible art programs and opportunities to Etobicoke residents, has worked with the BIA to create and put up two murals based on inclusivity and equality for all. The murals are interpreted from Article 6 and 13 of the Universal Declaration of Human Rights, on topics of freedom of mobility and the right of everyone to have recognition before the law. Wendy Rading, the Arts Etobicoke program manager and gallery director, finds that she shares the general idea with the BIA’s mission for the murals to beautify business areas, “Technically, they’re very beautiful, I think they do appeal to people in the community.”

But, Rading does raise some concerns in terms of the static scenes they display, “People here cannot relate to them, in a historical context they’re all very similar. The murals are all the same. I think I share the opinion here with a lot of folks from Arts Etobicoke that the murals tell a very specific narrative of this pioneer life.”

‘Faces of Islington’ is the sole BIA-created mural that showcases diversity. Celebrating the 100th anniversary of Islington middle school, the transitional mural shows at the left a black and white classroom with white children dressed in lumpy little suits and square, old-fashioned dresses. As the mural changes over to the right, colour is finally revealed in the mural. Not only is the chromatic, vibrant paint in the contrast to the black and white, there is culturally patterned fabrics with light purples and sky blues as clothing from all four continents. The faces of Islington on the right are varying. They’re deeper and darker tones; paired with natural locks, different cuts, headwraps and hijabs. It’s a mural that mirrors the individuals walking by it everyday, wearing ancestral clothing with headpieces that are not floral bonnets or wide-brimmed felt hats.

Rading said maybe the BIA painted the mural because they were facing backlash over all the white faces in the Islington Artwalk, “There might be a shift that they’re realizing we may need to be doing something thats other than that historical narrative from the early 1900s.” But Macanowicz completely denied the idea of backlash to the murals, despite the fact that ‘Faces of Islington’ was one of the most recent murals being painted in 2013. “No. The ‘Faces of Islington’ mural was not stemmed from backlash at all,” Macanowicz said. “Everybody is going to have backlash. You’re never going to please everybody. You’re either going to offend the artist, or you’re going to offend the residents.”

As for Arts Etobicoke, a new idea is in the works for representation of people of colour and culture within the original murals themselves. Their pitch is the developing augmented reality, a technology that when a phone or tablet is held up to the murals along Dundas Street a computer-generated image is created in live time on the user’s view of the art. “We’re not changing the murals at all, but through augmented reality layering on top of it another narrative,” Rading said. “An artist would create another image that would come up on your phone, and as soon as you take your phone away you haven’t touched the actual physical mural.” There’s a conception of Etobicoke being an upper to middle class, primarily white area, according to Rading. “But that’s not Etobicoke,” she said. The idea of augmented reality derived from “walking passed these murals every single day, thinking how do we respond? How does the community respond?”

“Inclusivity is very important, something that represents the people actually currently living in the community,” Rading said.

With the BIA murals looking through a historical eye, is it possible they missed a key part of Etobicoke’s founding? Currently there are no murals containing any historical references to the Indigenous history of the land. Even the name ‘Etobicoke’ originates with the Mississauga First Nation, who called Etobicoke Creek and the area around it “Adobigok”, meaning “where the alders grow.”  James Maloney, the elected member of parliament for Etobicoke-lakeshore, highlights on his website the history of Indigenous peoples in Etobicoke. “First Nations have been in Etobicoke-Lakeshore longer than anyone else. The Iroquois and Algonquins and other First Nations have called Etobicoke home for centuries. When Europeans began settling the area, the Indigenous people on the land were the Mississaugas, who settled on the Credit River.” Though the art-walk is an ongoing project with new murals constantly in the works, this key and initial piece of the community’s history has not yet been painted.

As for the community’s view on the murals, each resident seems to maintain differing views. Emika Hall, a senior at Etobicoke Collegiate Institute, comments that she sees “a couple murals with coloured people, but not a lot. They’re all pictures of old style living.”

“If they’re representing us as a community or neighbourhood, it should change.”