The squeak of the front door brings the frigid winds into the warmth of a tropical utopia. The smell of the wet humid air instantly hits anyone who enters this intimate escape from the big city. The hissing of the slithering snakes, the high-pitched chirps of the caged-birds, the sound of the trickling water and the loud chatter of young boys and girls echoes throughout the shop. Every once in a while, a piercing cold breeze rushes through as people enter and exit. Five adult bearded dragon lizards spend majority of their afternoon on April 9, 2019, laying all over each other. An adult can be anywhere from 22 to 24 in., in length. (JRN273/Briana-Lynn Brieiro)

Towards the back of the store a tall, curly-haired man in a baggy t-shirt with printed-beetles on it is feeding a massive 10-year-old green iguana named Iris. She is laying on a plank of wood directly above a narrow aisle of tanks that customers walk through. She is invisible to anyone who is too preoccupied with looking at the snakes and lizards that sit at eye level on either side of them. But whoever does get lucky enough to catch a glimpse of this dragon-like animal free-roaming through the shop, will certainly be in for a startling surprise. 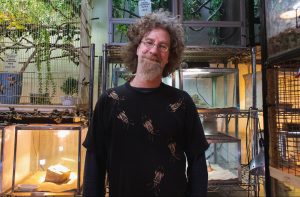 Paul Collier, also known as the Lizard King, is the owner and operator of Earth Echoes. As a reptile enthusiast, he emphasizes the importance of knowledge when it comes to owning a reptile on Jan. 29, 2019. (JRN273/Briana-Lynn Brieiro)

Earth Echoes is a narrow 19-hundred-square-foot reptile shop located on Bloor in Dufferin Grove (1192 Bloor Street West). Owned and operated by 53-year-old Paul Collier, Earth Echoes prides itself in having the healthiest captive bred reptiles in and around Toronto. Filled with snakes, geckos, chameleons, iguanas, birds, turtles and more, the store offers an intimate environment for reptile enthusiasts and others who have a burning curiosity to explore in the midst of their commute.

For the past eight years of business, Collier has dedicated himself to breeding and maintaining habitable environments for these exotic animals. “We rescue about 30 turtles or more a year and find the right homes for them,” says Collier as he catches a bird that flew out of its cage.

Next, he prepares the reptile’s greens and delicacies for the night. The delicacies are a tiny mix of insects that are squirming in the tray, attempting to escape their inevitable death as he reaches in and feeds them to the cold-blooded creatures. Unlike some people who walk hesitantly through this foreign habitat and cringing at the sight of the insects, Collier is at peace amongst these creatures.

Unlike other pet stores, Earth Echoes’ is “much more animal oriented,” says Collier. “My interests are in the animals more than the goods, because I’m an animal specialist and that’s where my energy is best used.” Upon a customer purchase “we try to provide them with enough knowledge to keep the animals healthy.” Earth Echoes is filled with the sounds of chirping birds that occupy the front half of the store. Cockatiel’s are one type that are known for their impressive mohawks. Taken on April 9, 2019. (JRN273/Briana-Lynn Brieiro)

As the janky bell of the squeaky door rings, a short man with an old baseball cap walks in with a subtle smile on his face. He is immediately drawn to the chirping birds by the front door. Collier peeks his head from over his desk and approaches the man with an enthusiastic hello. Kevin Beall is a regular at the store and has been purchasing mice for his son’s pet snake for a little over a year now.

“Paul, he’s knowledgeable and it’s nice to talk to him as opposed to going in, waiting to be served and then leaving,” says Beall. “It’s more like coming into a family store than a pet store.”

Dylan Moniz, a high-school co-op student agrees, “I think a lot of pet shops, especially in Toronto, are a little more impersonal.” “It’s usually just a bunch of guys running the shop who don’t even own the place and who don’t necessarily know what’s going on, but here it’s a lot more down to earth than some of the other pet shops.”

Prior to opening his business, Collier ensured that he had adequate experience as a breeder and was fully educated in the field of Herpetology: the study of amphibians and reptiles. “Once I had enough knowledge that I could share with people, then I sort of opened my doors to other people.”

Without any formal education, Collier found his own means of quenching his thirst for knowledge. His interest in the world of reptiles started at a young age. As a little boy, Collier would spend his days at the Humber River in the west end of Toronto searching for all kinds of species.

“It was much more wilder back then,” says Collier. “I used to go bird watching. I used to catch all kinds of thing; whatever was sort of around.” Out of interest and curiosity, he would catch snakes and other animals to take home and breed.

A satellite view of a main stretch of the Humber River in 2002 versus the present day. This bare eyed cockatoo named Little Star stands out amongst the rest of the colourful birds with its snowy white feathers on April 9, 2019. (JRN273/Briana-Lynn Brieiro) Two juvenile iguanas embracing each other on a thin wire on April 9, 2019. They are native to Central America, South America, and the Caribbean. (JRN273/Briana-Lynn Brieiro)

Once he had successfully bred and meticulously studied the species, he would return them back into the river and repeat the process with another set of animals. To young Collier, this practice was simply a way of having fun and learning; however, this experience set the foundations for what is now known as Earth Echoes: a pet store unlike any other.

Collier reconnected with reptiles when he was around the age of 21. Instead of heading back to the Humber River for animals, this time around he bought chameleons from a pet store.

His mindset in regard to the importance of education, translates to how he operates his store. His main priority is to ensure that all of his customers are informed about their desired future pet, before making the big purchase. Understanding the fundamental components to a proper environment for a species and the necessary maintenance and care protocols are critical if one wishes to purchase a pet from Earth Echoes.

“I like people to do quite a bit of research before,” says Collier. “Sometimes I steer customers into simpler animals or animals that are more suitable for their wanting of a pet… because it’s about the animals as well as them.” 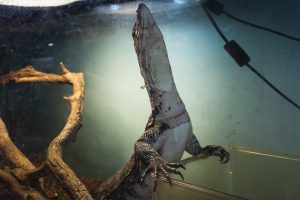 Although most of Paul Collier’s lizards are particularly small, the Nile Monitor Lizard is currently one of the largest lizards in the store. Its length varies between 1.2 and 2.2 metres. Taken on Jan. 29, 2019. (JRN273/Briana-Lynn Brieiro) Harriet is a non-venomous boa constrictor snake. Her and her boyfriend Harry have had 10 babies this year alone. Taken on April 9, 2019. (JRN273/Briana-Lynn Brieiro)

“I’m always learning something new and that is very important when it comes to caring for the animals” says Moniz.

The success of the shop is contributed to the prioritized attention to the reptiles. “The shop is developing,” says Collier. “I seem to be getting more and more customers and more interest in what I have and what I do.” Being that Earth Echoes is located in a central area, near the subway line, Collier explains that his business has benefited from how accessible it is to the public.

As much as Collier emphasises the importance of research, he also recognizes the role of observation. “If you use your intuition, you can learn a lot on your own too just by watching the animals and letting them dictate a little bit of what they need themselves,” Colliers says as he hands me a small ball python snake from a plastic container. The snake slowly stretches in my hands, sending shivers down my spine as I feel its smooth skin against mine. As I feel the legless reptile’s scaly body curl around my fingertips, all that I can hear is the hissing of the slithering snakes, the high-pitched chirps of the caged-birds, the sound of the trickling water and the distant murmur of the big city creeping in.