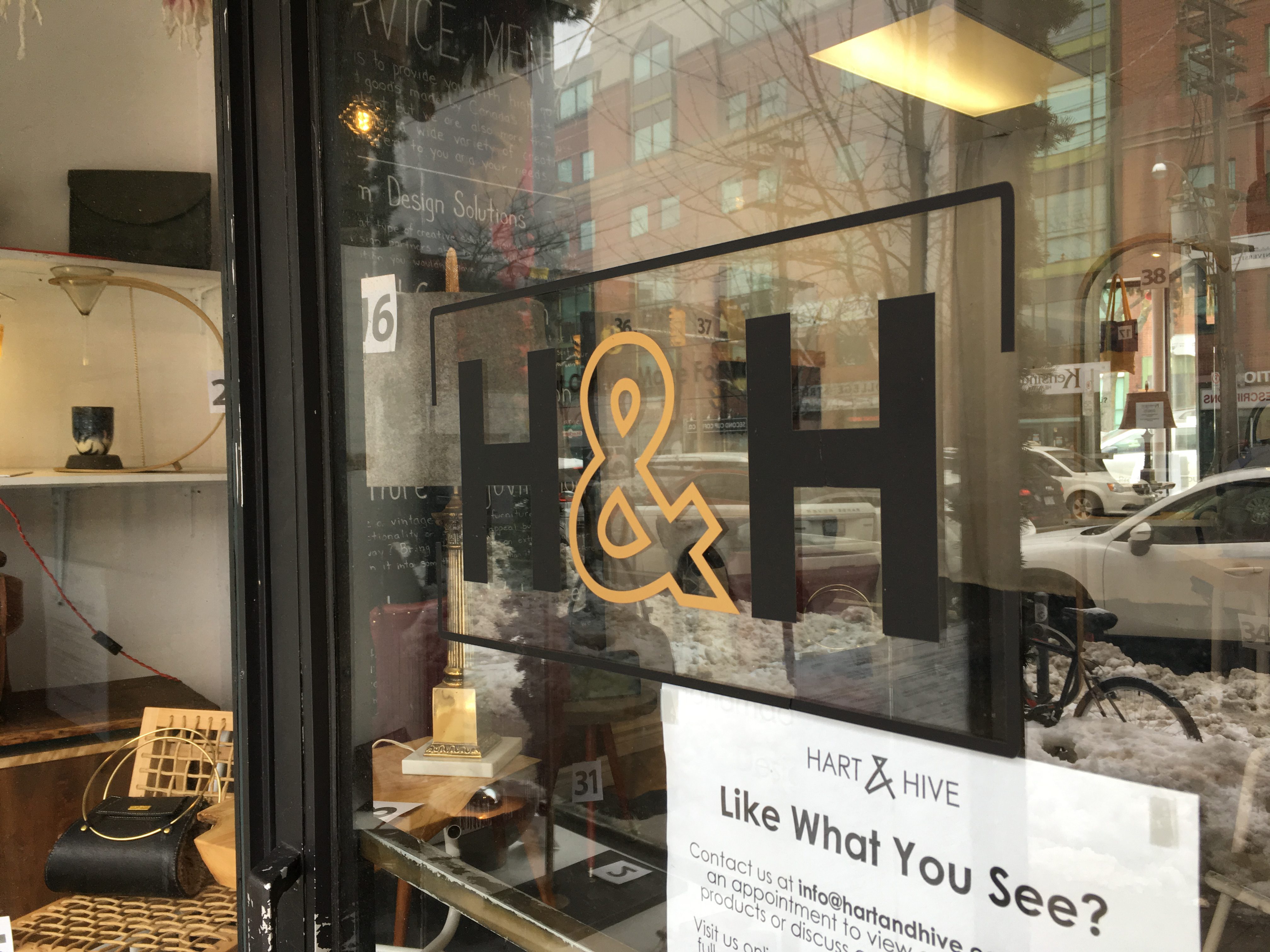 As I walk, the floor creaks with my every step. The room itself is quite small. There are large potted plants in a cream cotton fabrics hanging from the ceiling, all sorts of wooden made chairs are scattered around on display, each of them ranging in size. Just beyond Dufferin Grove Park, inside the core of Little Italy, stands Hart & Hive: A Place for Design. Inside the store, it’s crowded with all kinds of items, each of them appearing as if they have come from a different decade.

Thomas Hart is the creator behind Hart & Hive, a design hub where artists and designers sell their ware.  Hart & Hive officially opened in 2017, with Hart’s goal of developing a space that sells only handcrafted products. In his late 20s, Hart is an OCAD graduate who studied industrial design. On this February day, the shop is closed to the public, but Hart is dressed in a top-notch tweed blazer accessorized with a baby blue ascot, along with a beige winter coat.

The deeper you go into the store the stronger the scent of fresh cut leather becomes. There is a table against one of the walls which features a selection of accessories such as wallets, handbags and luggage pieces. Hart walks around the shop telling me stories about the pieces he’s created. He’s tall and has to crouch to each object as he tells their stories.

With a huge smile, he gazes at one particular item. It’s a full-leather handbag with many pockets and golden buckles hanging on each of them and its handles are completely made from wood. “This bag here was stitched all by hand. I worked on this every day for two weeks, it took 50 hours”, Hart says bending forward to get a closer look.

The design store came to be when Hart found himself continuously making things but having nowhere to put them. “There just wasn’t really a place where I felt like selling them. So, I thought I’m just going to have to sort of make my own space,” he says.

The before and after sequence of design shop Hart & Hive between March and May of 2017. (Instagram/ @Hart_hive)

Since the hub is located close to the community of Dufferin Grove, an important theme of the store is to be local amongst its suppliers and partners. “I want to celebrate local design and Canadian talent,” Hart says.

This also means being close distance to the places in which he gets his materials from. He often goes to CGA Glass & Mirror on Harbour and Grace, which is his go-to place for glass cutting. In terms of fabrics, Hart is fond of Designer Fabrics on Queen St. “It’s nice to have places all within walking distance of us. I could be here in the studio working on something and prototyping or coming up with a new product and say ‘oh I need this trimmed or this hardware right now’, I could run out and go get it,” he says.

The “Hive” in the shop’s name comes from the idea to be a collective and collaborative group of workers, similar to bees working in a bee hive. However, Hart appears to be someone who does things independently, “As far as official ownership of the business and control, it is me who is doing it all,” Hart says.

Since he is an OCAD graduate, it is surprising to see his current position of being a business owner. The program took focus on designing products and creating them for the purpose of being sold, and as Hart says “It could be anything from this sewing machine to your bag, to the chairs we’re sitting on. A designer designed them in some way.” But in terms of a business education, Hart didn’t attend school, but rather took the old-fashioned root of learning from experience.

“All throughout my time at OCAD, I owned a coin operative laundromat,” says Hart. He described the place as a small-scale business with no employees. Hart would rarely be on sight but he is thankful for the experience. “It was a good sort of baby step into accounting… permits… insuring and that [business] stuff,” he says.

Hart also emphasizes how Hart & Hive was really the beginning of his business ventures. With limited experience, he found himself in a place where he learns as he goes. This must be done in order to fulfill his dreams of owning his own shop.

He admits it can be stressful financially when running a business. I follow Hart into the workshop portion of his store, an area that is hidden from costumers. It’s a cluttered space with loose fabrics, metal parts and an old sewing machine on a wooden table. He sits on a tall medal stool, wearing his beige coat, as this part of the shop is oddly cooler.

“In the beginning, there is some pressure, [because] in this city everything is just really expensive… this is definitely the most involved and most official business that I have ever ran,” he says.

According to Hart, approximately 60 to 70 per cent of the items selling are his own works, made right on sight. A major philosophy behind the brand is to create heirlooms that advocate sustainability. Since each of Hart & Hive’s products are handcrafted, Hart makes products with the intention of it lasting for decades. Rather than creating products that are made with eco- friendly materials, Hart believes it’s important to make something with longevity, so there is no need to constantly replace things. Meaning he creates his products using items such as leather instead of pleather, to advocate materials that will last for many decades.

His personal lifestyle has been a big part of his businesses branding. He describes his home as being a mix and match of items, majority of them antique pieces. “I don’t really buy a lot of brand new mass-produced stuff and I definitely don’t buy plastic things either. If you go to my house, there is nothing in there that is plastic,” says Hart.

Hart & Hive’s current store is to be demolished towards the spring, although the brand itself will relocate and remain active. Hart was notified of the changes months in advance by the landlord who owns a set of hostiles a few doors down. “He wants to expand his hostile, there just tearing it down to build something bigger here essentially,” he says. Hart wants to continue on with the brand with minor changes. Hart & Hive will be focusing less on incorporating other designers and more so focusing on building their own brand.

Hart sits tall on his metal stool, glancing at his workshop table and the materials that surround it, a serious expression suddenly crosses his face.

“Hart & Hive will definitely be continuing as a brand, but more so showcasing products made here. As we grow it would be nice not only learn more about myself, but also have the opportunity to have an independent brand,” he says.