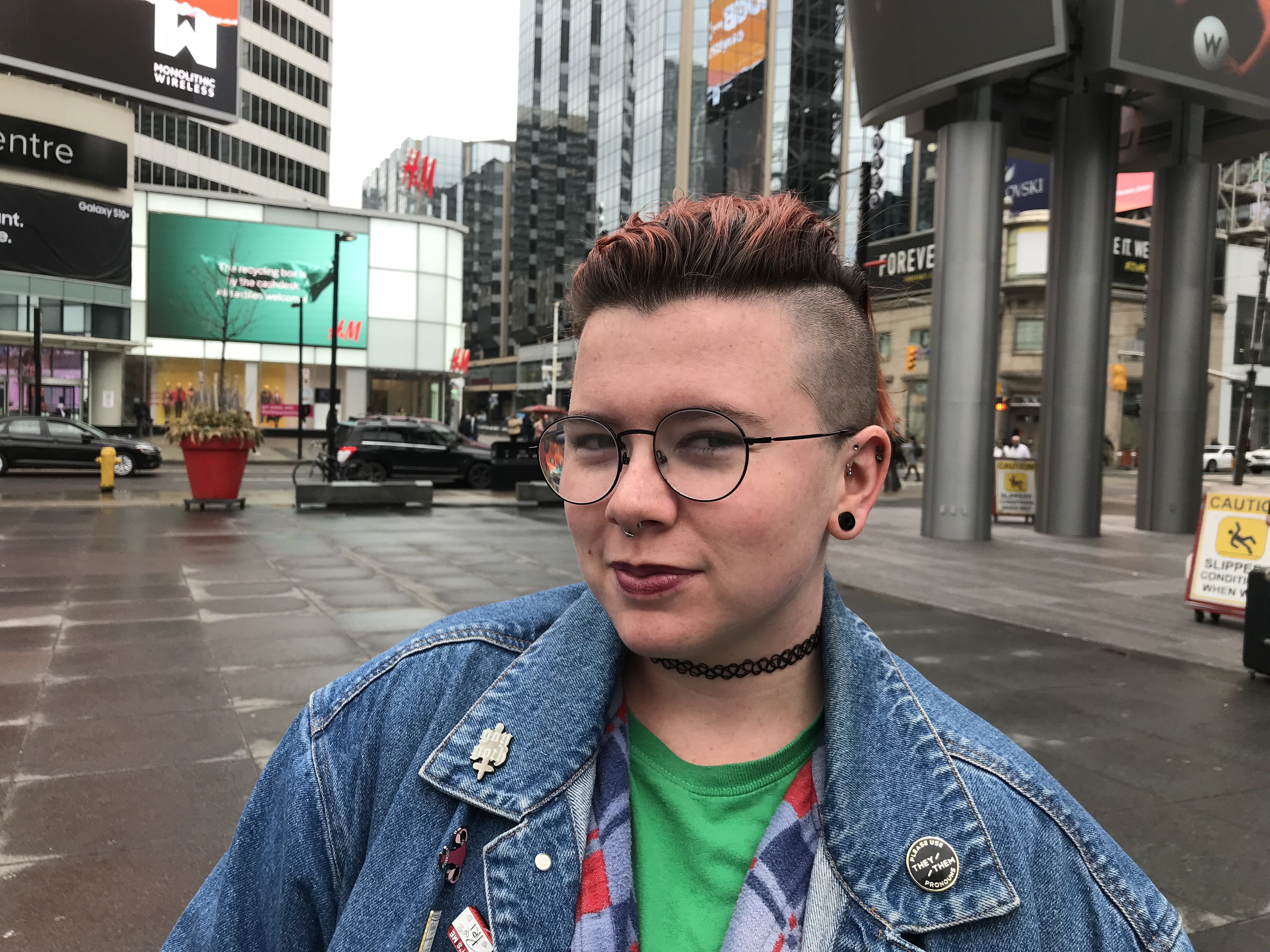 Every day, people are placed on a gender spectrum. Whether it be when choosing which washroom to use, filling out a form or being greeted in a classroom as “boys and girls.” But what if you aren’t one of the only two options? What if you fall in the middle? As a non-binary person, Kye Munro fights for space on this spectrum every day.

Kye never “came out” in the traditional sense where they made a speech and stuck a rainbow flag on their locker, Kye just brought Sam home to the family and figured they’d get the idea. Without much discussion, the Munro’s neither accepted nor declined their child’s new partner. Until Kye and Sam moved to Toronto’s Don Valley Village, where they felt would be a much more queer-accepting city.

Kye came out as non-binary on Instagram in February 2018. Despite having lots of support from their followers, this was “too much” for Kye’s mother.

“She told me it was the city’s fault for being too gay, or it was Sam’s fault for transitioning and corrupting me. Told me it was just a phase and I wanted attention,” said Kye about their mother’s reaction to them changing their gender identity.

The phone calls between Kye and their mom that, prior to coming out, would max out their long distance cell phone plan slowly faded into weekly texts, and then to silence. The upcoming, non-refundable trip was working up to be anything but a vacation.

“Just before I got to the airport, she said she was excited to have me come home and be normal again,” Kye said.

Excited was the last thing Kye felt, but there was one thing they were looking forward to; seeing the impact their activism left on the Richmond School Board in Vancouver.

Kye’s passion for activism began in high school, before they identified as a member of the LGBTQ+ community. Nathan Lee, a twelfth grade gay student at the time, and Kye launched a queer-rights activist campaign called “the belonging project,” where students from high schools in Richmond, B.C. sent anonymous photos of where they felt the most and least comfortable at school.

“It was consistently bathrooms and change rooms where these students hated being,” said Kye. So we asked the superintendent if there was a policy in place for these issues … there was nothing.”

Kye and Nathan took this issue as far as they could, facing hateful slurs from parents, students and even members of the school board who were against them.

“There were so many parents against us,” said Lee. “Parents who thought that being gay was a choice and if we went through with trying to have a queer-right policy change, we would turn their kids gay.”

A couple short years later, a policy is been established for queer rights in bathrooms and change rooms to create the safest possible space for those who may not identify on the traditional gender spectrum. The Richmond School Board even marched in the Vancouver Pride Parade for the first time last summer.

“An old teacher called Nathan and I up and asked us to lead the school board in the parade,” said Kye. “It was one of those moments where I was so overcome with complete pride in what we had done.”

Despite Kye’s accomplishments in creating belonging for queer students in Vancouver, they still struggle to find that belonging for themselves. Identifying “off the spectrum” comes with misunderstandings and ignorance from society, making inclusive places hard to find.

Things like attendance in classrooms, government identification and slipups on their preferred pronouns are daily challenges Kye faces.

But there is one place where Kye has found a true sense of comfort: the church.

Prior to coming out as non-binary in 2018, Kye got a job as the Sunday school teacher at Rosedale United Church in Toronto. After Kye changed their name and identity, parents and children were “incredibly welcoming,” according to the Church’s Minister, Kristin Philipson.

“This church’s demographic is strictly older, wealthy, white people, who you’d imagine are pretty stuck in their ways,” says Phillipson. “But no one, not one person cares.”

Rosedale United is known as an affirming congregation, which means they have full inclusion of the LGBTQ+ community. In order for a church to be designated as affirming, they must follow the educational guidelines and provide the queer resources set out by the affirm council, which is overseen by Kye. Kye sits on a national committee called Affirm United, where they advocate for queer rights in the church.

At Rosedale United, they not only include all members of the community, but they also teach the children of the church about different sexual and gender identities, according to Phillipson.

“Sometimes the kids will ask me if Kye is a boy or girl, but not because they want to be inflammatory – they ask because they want to get it right,” said Phillipson. “When you can respond in a no-judgement way, it’s an education starter that gives the child a new outlook on the world, and that’s the greatest thing that Kye has brought to this congregation.”

The church has become Kye’s place to escape the questions or concerns about their gender identity. In Kye’s experience, those come in abundance when a person identifies as non-binary.

To keep society’s eyebrows from raising, Kye tries to keep their presentation as solely more masculine. But for someone who doesn’t identify on the gender spectrum, presenting in just one way is only for the sake of society’s speculations, not because that is the gender they feel more closely related to.

“Identifying as non-binary is hard because you don’t identify as one or the other,” Kye explained. “Just because I appear more masculine doesn’t mean I want to be a man. But if I were to put on a face of makeup, everyone would have something to say.”

Kye has found a safe space to fulfill their desire to present however they want, knowing that, similar to the church, no one will care. A short subway ride from Finch down to Wellesley, Kye has taken their activism to a performative setting in the drag community. The Drink, the Beaver and Crews and Tangos are some of Kye’s favourite bars to perform.

For Kye, drag is a huge part of self-identification and expression. Kye has chosen to present more masculine to compensate for their feminine body type and mannerisms, but there are still some days where they feel like presenting more feminine, and drag gives them this opportunity.

“There’s so much more to drag than just gay men dressed as women saying, ‘YAAS QUEEN!’” said Kye. “It’s such an inclusive space for someone like me. But don’t get me wrong, there’s still a stigma around us who are non-binary.”

Ignorance surrounding gender identity is the reason for discrimination, according to Kye. Gender has always been black and white with no room for grey, and there is still a barrier for those who identify “off the spectrum.” Despite there being more acceptance and rights for the LGTBQ+ community, especially in Toronto, there is still a lack of understanding around those who are not just gay or lesbian.

“Queerness is not a negative thing, and it’s also not a choice,” says Kye. “In a perfect world, I could identify how I want to identify and no one would bat an eye. We’re not there yet, but I hope one day we will be.”